This week I was really down as I have damaged the nerves in my neck. Lots of pain, pain killers and limited usage of my left arm.

I had my first event booked for Saturday and wasn’t going to make it. However, I had a pass, had paid for a ticket and most importantly really wanted to play.

I forced myself back to work on Friday to prove I could do it, then made the call that evening that I was going to attend.

I really like the states game and as such wanted to try something out.

For me this was a simple round. We had some no shows on the day which was a shame but it left us on 15 players. I was the bye for round 1 but it let me take a few quick pictures. 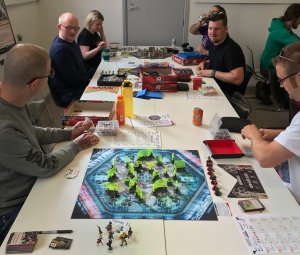 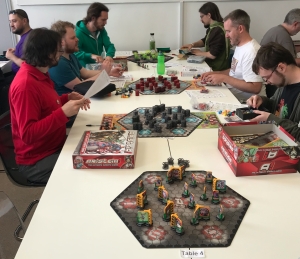 These were taken as the round began. I then had some time to pass. I decided to refine my demo skills as I am applying to be an Aristeia! Warcor. So I ran a demo for the store owner. (7th City our hosts for the day are a new store and have limited games on offer currently). It must have worked as he played games throughout the days vs the byes 🙂

I was unsure how byes worked but after scanning the AGL doc I understood it would become apparent at the end of the event as to what I scored.

In this round I played a local by the name of Owen (Hobbygeek) he was the first person I knew to pick up A!

He has a lovely painted team that he did in his team colours.

My team hEX3r, Dart, Parvati and Eclypse. I regretted not making Kozmo for his smoke in this game vs Owen’s Maximus, Mushashi, Wild Bill and Mendoza.

I took and early lead to got 3-0 up thanks to Ultimate Power on turn 1.

Owen started to trickle back and we ended up tied on 5-5. We both held 2 zones Maximus was in the central zone and hEXxer was in Vade Retro range.

The last activation was hEXx3r. All I needed was to hit the success on Vade Retro twice on 5 attempts. I missed the first 3 but hit switches to get into the zone. 1 hit the 4th but then…

The game ended there as I couldn’t get him out of the zone so he won 8-5. Close and a great game vs a lovely and regular opponent of multiple games systems.

I had never played Blitz before, but I was aware the scenario could be fast.

My 4 were Dart, Eclypse, Bachman and Parvati vs Adam (EastofIrem) hEXx3r, Bixie, Wild Bill and Laxmee.

As the game began I thought, if I kill stuff then I will be ok and figure out how it goes. As it turnout this was wrong. I went 3-0 up by scoring and killing Laxmee and Wild Bill. Thanks to Bachman and Dart. However letting my opponent become the underdog allowed him to score back quickly and it became clear that I was going to struggle Adam (EastofIrem) never looked out of the game, actually I never looked in it.

He played in a seamless way and after the game it became clear he had played the scenario many times. I lost 5-8.

So 2 games and 2 losses. Ah well I was having fun and that’s what this is about right? It’s a hobby, this is something that felt very different from other games I have played competitively.

Final Round – King of the Hill

A straight fight in the centre I can do this. I drew a dream hand turn 1. Last activation of Turn 1 I played Batrachotoxin which followed on from Predatory Instincts and a Bachman activation. Prysm and Valkyrie both died in the zone.

Now Valkyrie was reduced in Energy I felt more confident. As the game progressed Alex was unlucky not to do more damage but I managed to get 3 models sat in the central zone and was able to kill models on approach. Bachman was my MVP for the game.

Alex offered me a handshake 2 activations before the end of the turn as he had no opportunity to to get me out of the zone and I would win 8-1. I accepted the shake. However I had a kill on the table which I should have taken as it would have won me the most Frags award due to how the bye round would have been calculated. I also didn’t record my first bloods which I will do in the future as I got it in all 3 games I played.

Stats for the Day

An amazing day and some great fun. Lots of pain in my arm but worth it.

I finished in 8th place I happy with that, mid table and had loads of fun. The event was well run, venue was great and all my opponents were fantastic.

For anyone who wants to look at the event as a whole please follow this link.

Congratulations to Jonah, who appears to be the man to beat as he is undefeated as it stands in tournaments including our TTS League. He also took most Frags in the day.

Owen my opponent from Round 2 won best painted.

With an impending new life joining my family physical event will most likely be few and far between. However TTS exists and I may manage a pass sometime in the next 6 months.

I am working my way (when my arm works again) through painting all the models so I can get on with streaming.

Thanks for reading and Happy Hexing.

One thought on “Into the Hexadome GT 1.0”